We all love comeback stories, and the sporting comeback remains one of the most memorable moments for fans of any team (except the losing one). The last PSL season witnessed its fair share of comebacks, with Orlando Pirates leading the way for points won from behind. Having the grit to bounce back from bad starts is a good trait for any team, although one may be concerned as to why a team is consistently chasing games. Indeed, the Pirates hierarchy may have considered the same questions when deciding on coaching changes and may have been worried about the trend. 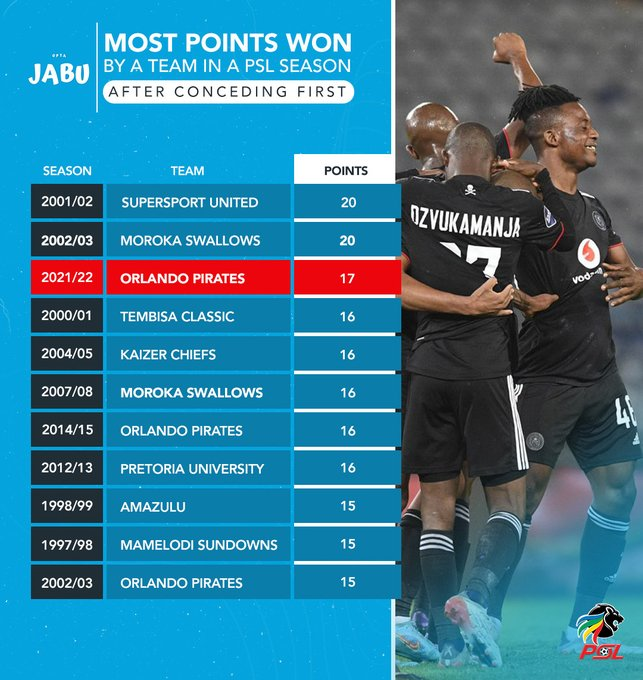 One could argue that the coaches were onto something:

As shown above, the Supersport 2001/02 side recovered 20 points from winning positions, led by Pitso Mosimane for most of the season. Patrick Mayo (9 goals) and Abram Raselemane (7 goals from 9 starts) contributed the goals in a campaign that saw them finish an impressive second position, five points behind champions Santos. The joint-most points won by a team after conceding first came the following season, as Gavin Hunt’s Moroka Swallows recovered to win points in 10 games. They won fine and drew five games after the opposition scored first, the most famous of those wins coming against Pirates. Under Hunt, they’d do the same again in 2005/6, but not too often otherwise.

1 – Outside of Gavin Hunt, Swallows won just one game where Pirates scored first, losing every one of the other 18.

Not So Good At Comebacks

Only six sides in PSL history have finished a season without picking up a point when the opposition scores first. These are:

Not a surprise to see Michau Warriors in there, one of the worst teams in the local professional game. They conceded the opening goal 17 times in 96/97 and did not recover a single point, a record for games a team conceded first in a single season without winning a solitary point. Mother City doesn’t feature on this list although they conceded the opening goal a PSL record 25 times in the 1999/00 season (they drew twice – yay!). One may be surprised to see Chiefs’ title-winning squad in there, but it’s mostly because they didn’t trail that often in that campaign (only three times).

3 – Chiefs conceded the opening goal on three occasions in 2003/4, a record for the fewest times a team has conceded first in a PSL season.

Sundowns came close to equalling that record last season and were on course until the 3-0 defeat at home to Stellenbosch in the penultimate game of the season. Downs had conceded first just three times before that game (all three occasions coming in December 2021). They won the fewest from conceding first this past season (2), but like 03/04 Chiefs it’s because they rarely trailed. Things were different just a season before.

Get weekly emails packed with the best tips and sports content.

Get ahead of the game now – fill in the contact form below.